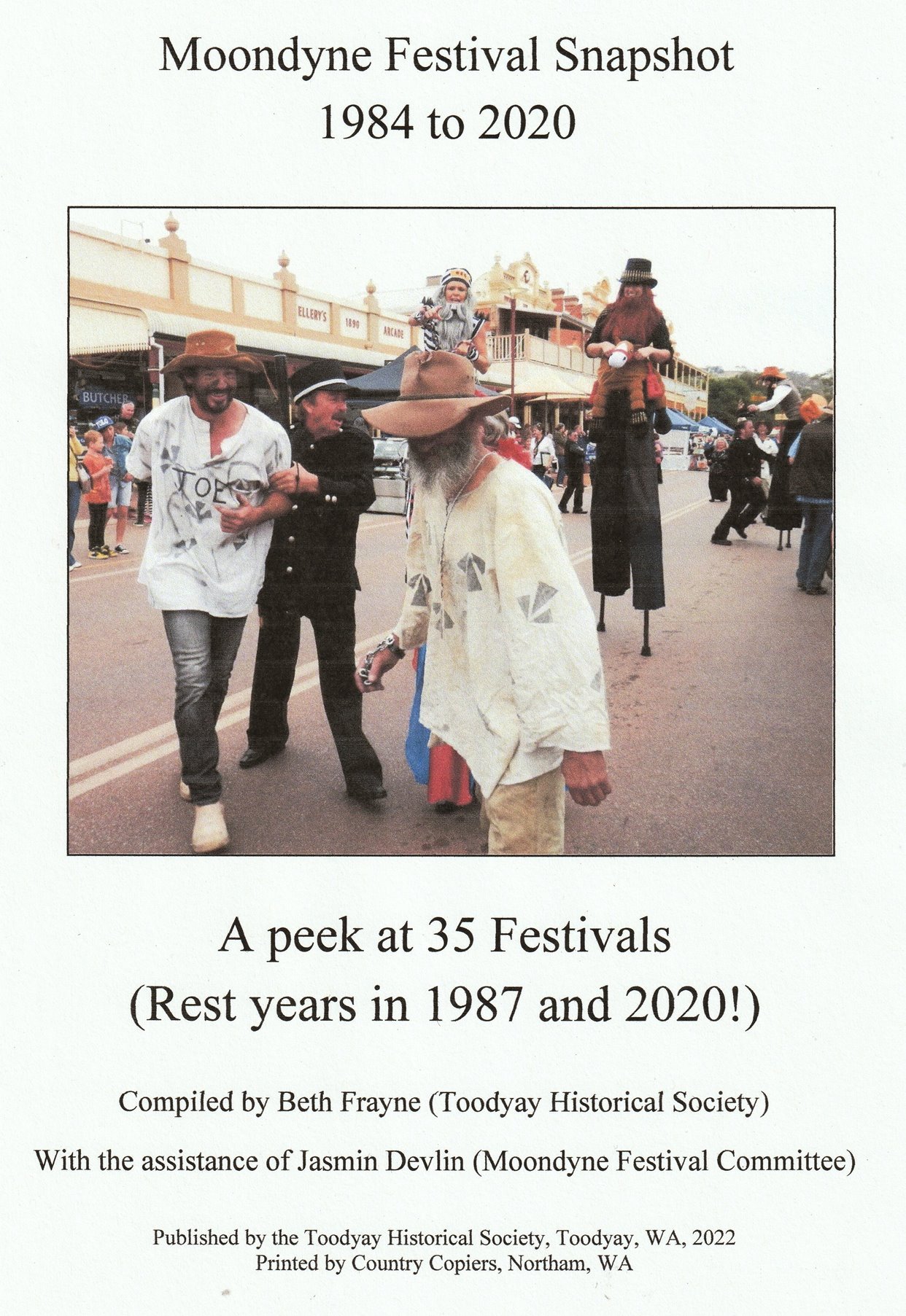 Summary: A quick reference illustrated book about the 35 Moondyne Festivals held in Toodyay over the period 1984 to 2020. Each year includes a double page of photos and basic information about the what was new each year, organisers, sponsors, weather, numbers attending, entertainment, parade participants and information sources.

A Moondyne Joe Gallery is a feature on the end papers, so you can check who played Joe and when.

“A preliminary reference work, commenced in 2018, was completed just in time for the 36th Festival on 2 May 2021. A taster (incomplete version) had been released in May 2019.  This edition is the final ‘snapshot’ work, and names have been indexed! It is hoped a ‘proper’ Moondyne Festival history book will be written by others someday, maybe for the 40th Festival in 2025! My thanks go to Jasmin Devlin for her assistance in producing this overview, and also to Tony Maddox and Terri Watson for photograph identification help. If you have any memories, memorabilia or special images, please contact the Moondyne Festival Working Group or the Toodyay Historical Society, as this may help the next Moondyne Festival story writer.” 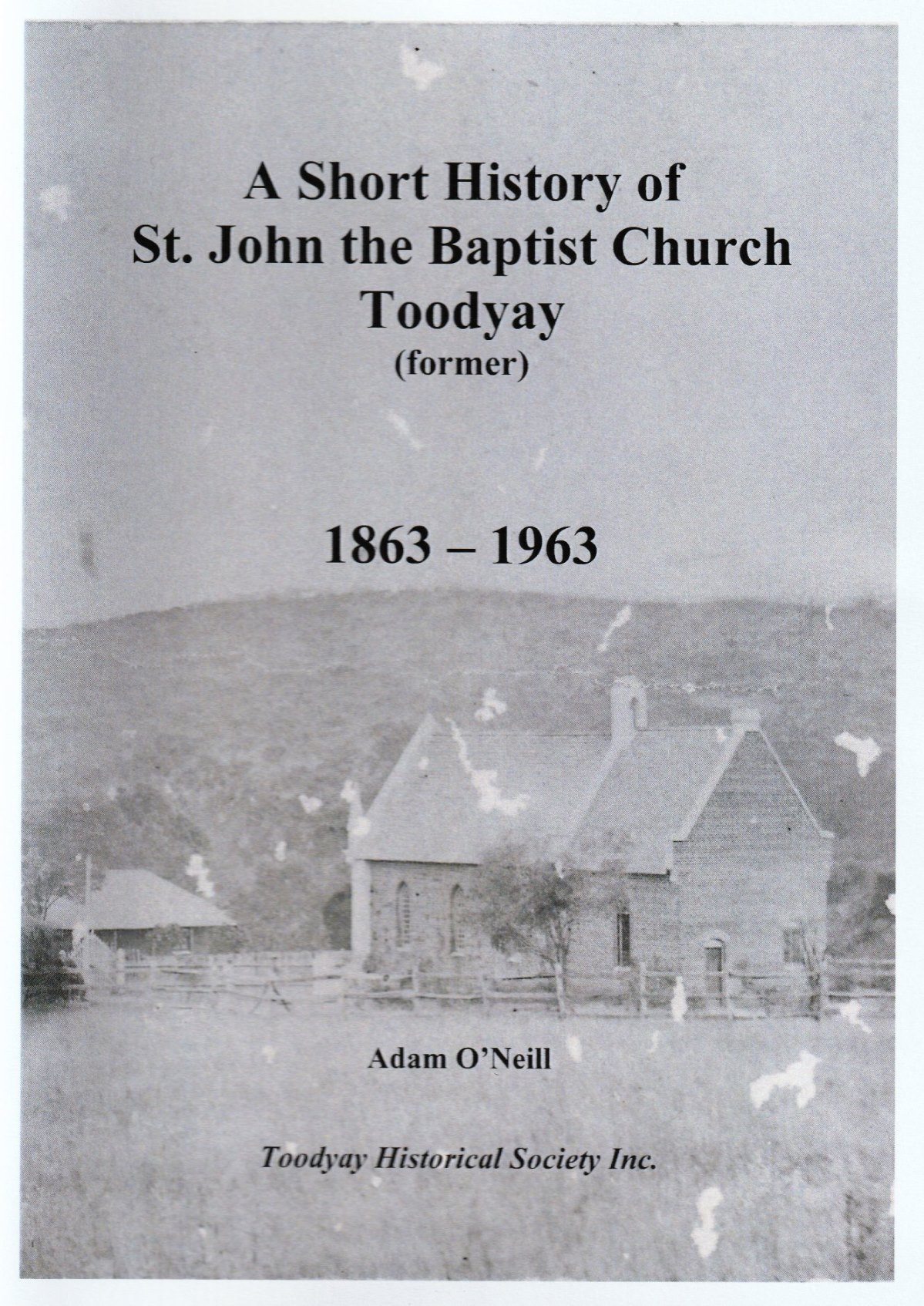 This church on Stirling Terrace, Toodyay, was built in 1863-1864  and consecrated at Christmas 1864. One hundred years later, the church was deconsecrated on 17 November 1863, and a new brick church with same name, across the road, was consecrated  on the same day.

From the Introduction & Acknowledgements: “St. John the Baptist Church (former), Toodyay, served the Catholic Parish of the district for approximately a century. It …  was part of the fabric which comprised the Toodyay Parish community up until the 1960s. This booklet provides a mere insight into the the interactions of the Toodyay congregation, and how St. John the Baptist Church (former) was central to this communion..” 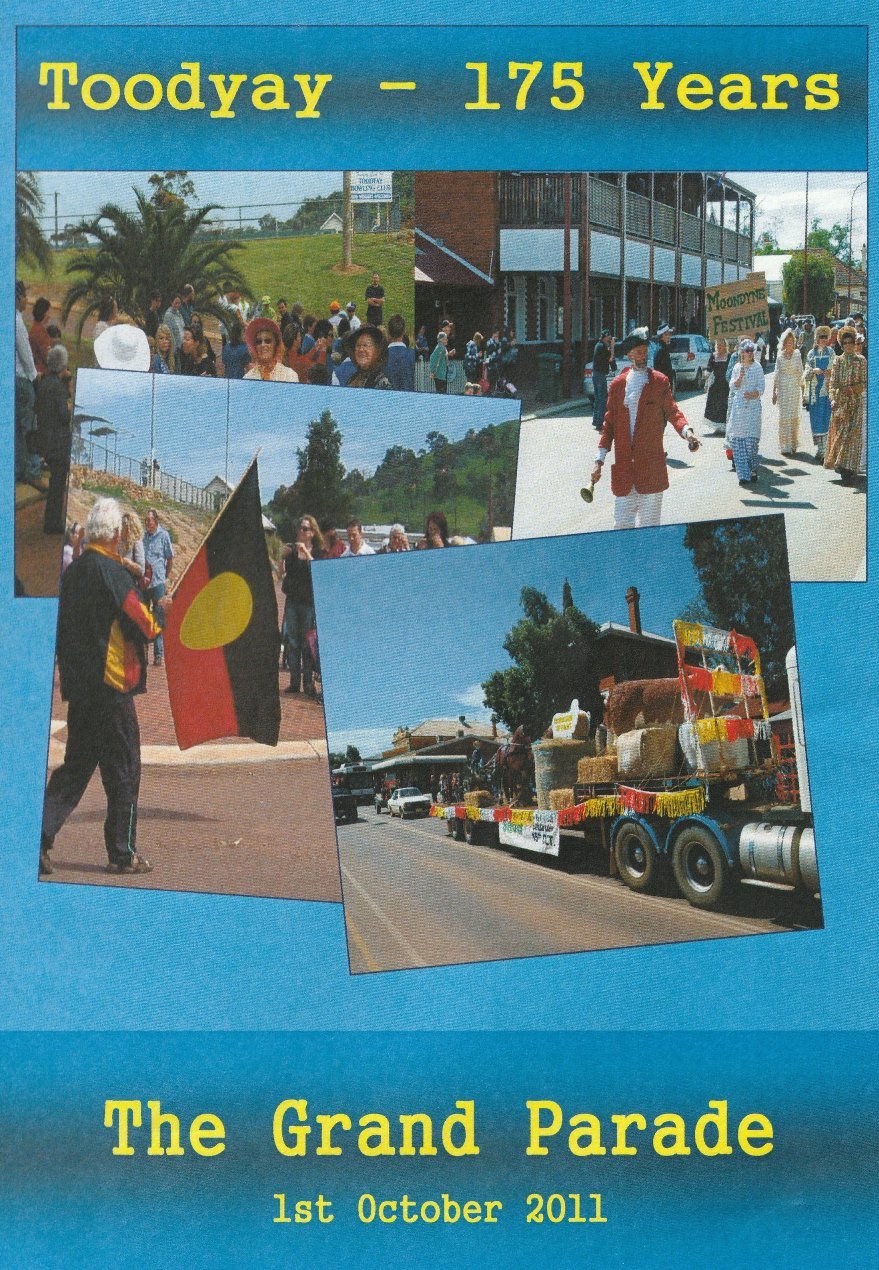 Back cover: “The Grand Parade was a major event in Toodyay’s celebration of 175 years. It featured mainly local people and local organisations, celebrating all that is good about Toodyay. 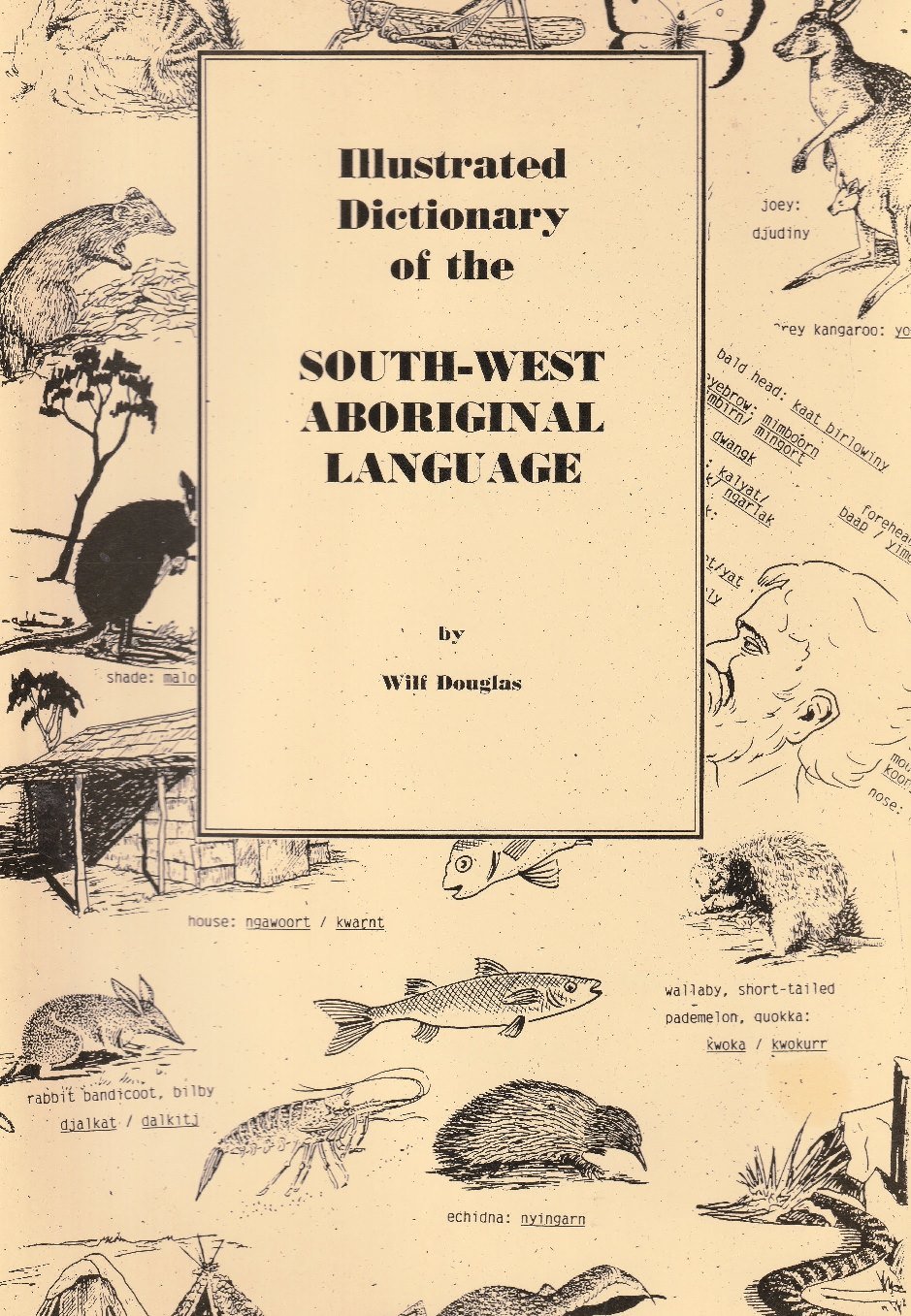 From the Introduction: ” This illustrated dictionary of Australia’s South-West language has been produced at the request of an Aboriginal elder who was anxious that his people should have some record of the names of plants, animals, insects, trees and other features of their rich cultural heritage.” 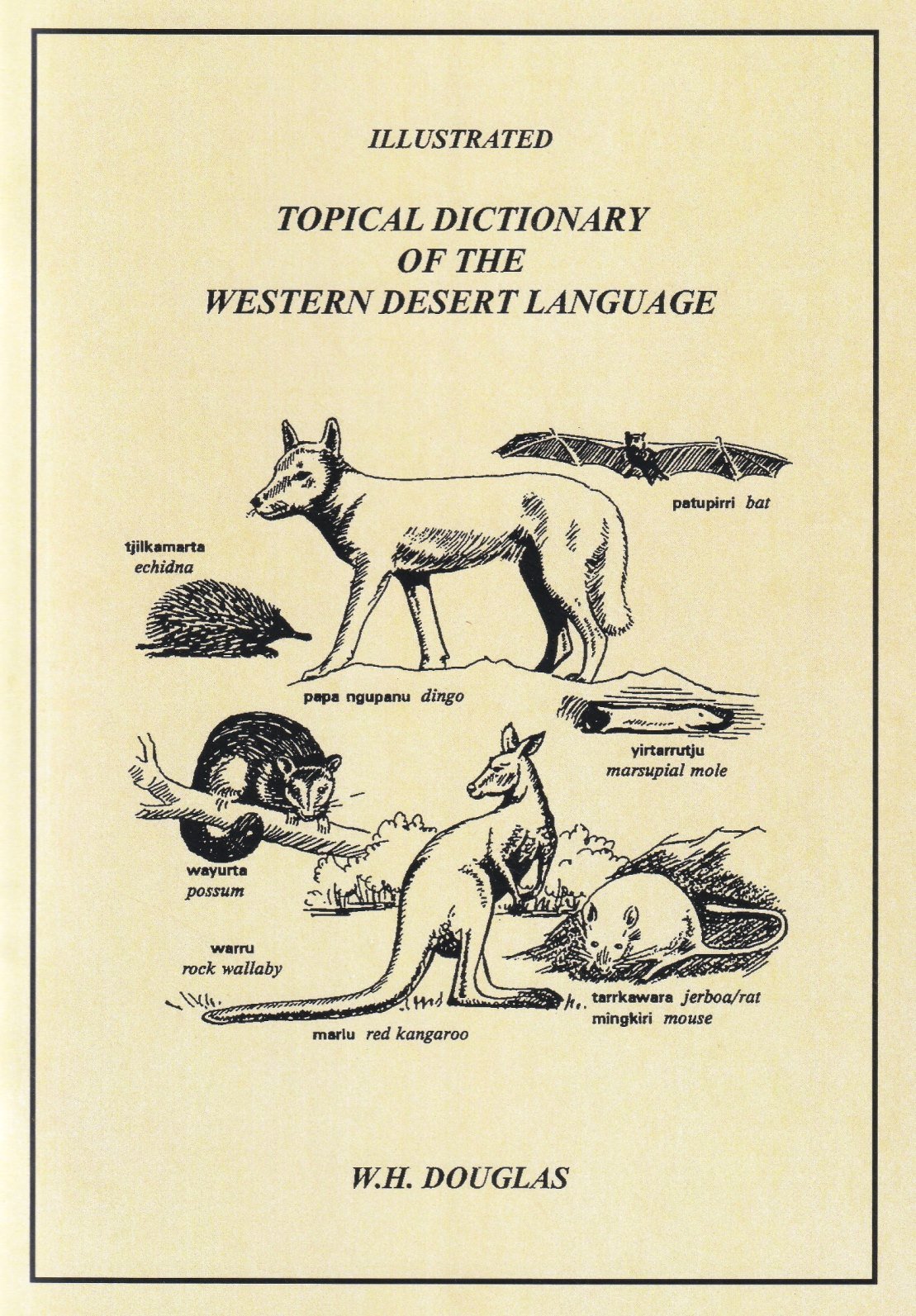 Illustrated topical dictionary of the Western Desert language – based on the Ngaanyatjarra dialect. 5th ed.

From the Preface: This work “has been been a popular book over a long period of time. For that reason, when stocks ran out, we were pleased to have reprinted with a slight change in the cover design. Wilf Douglas passed away in 2004. He was a pioneer in the study of indigenous languages in Australia and was a great advocate for indigenous language and culture. There for we feel it appropriate to continue to make this work available to potential students of the Ngaanyatjarra language. We are grateful to our mutual friends Dr Toby Metcalfe and his wife, Dawn, for facilitating this printing for us. Amee Glass & Dawn Hackett, 2010.”

Summary: An updated and expanded new edition of the Society’s 2007 Reunion booklet. Each year includes a double page of the Executive, Committee and other position holders, a page of highlights and a page of colourful images. Overviews are also given of our Honorary Life and Benefactor Members, and there are tables summarising position holders in the appendices.

From the: Foreword (2020)
“Forty years is a significant milestone. That this anniversary occurs in a year of world upheaval due to the particularly virulent disease COVID-19, reminds us all that change is inevitable and that the value of maintaining records and preserving contemporary information for future consideration is paramount.  ….
This is now an interesting time to look forward to the next 40 years and what they may hold. I can guarantee that anyone looking back on the last 40 years will be able to glean a substantial amount of information on Toodyay’s rich history due to the hard work and dedication of the Toodyay Historical Society. May it always continue to shine a light on Toodyay history for future generations.
Linda Rooney, President, Toodyay Historical Society (Incorporated)” 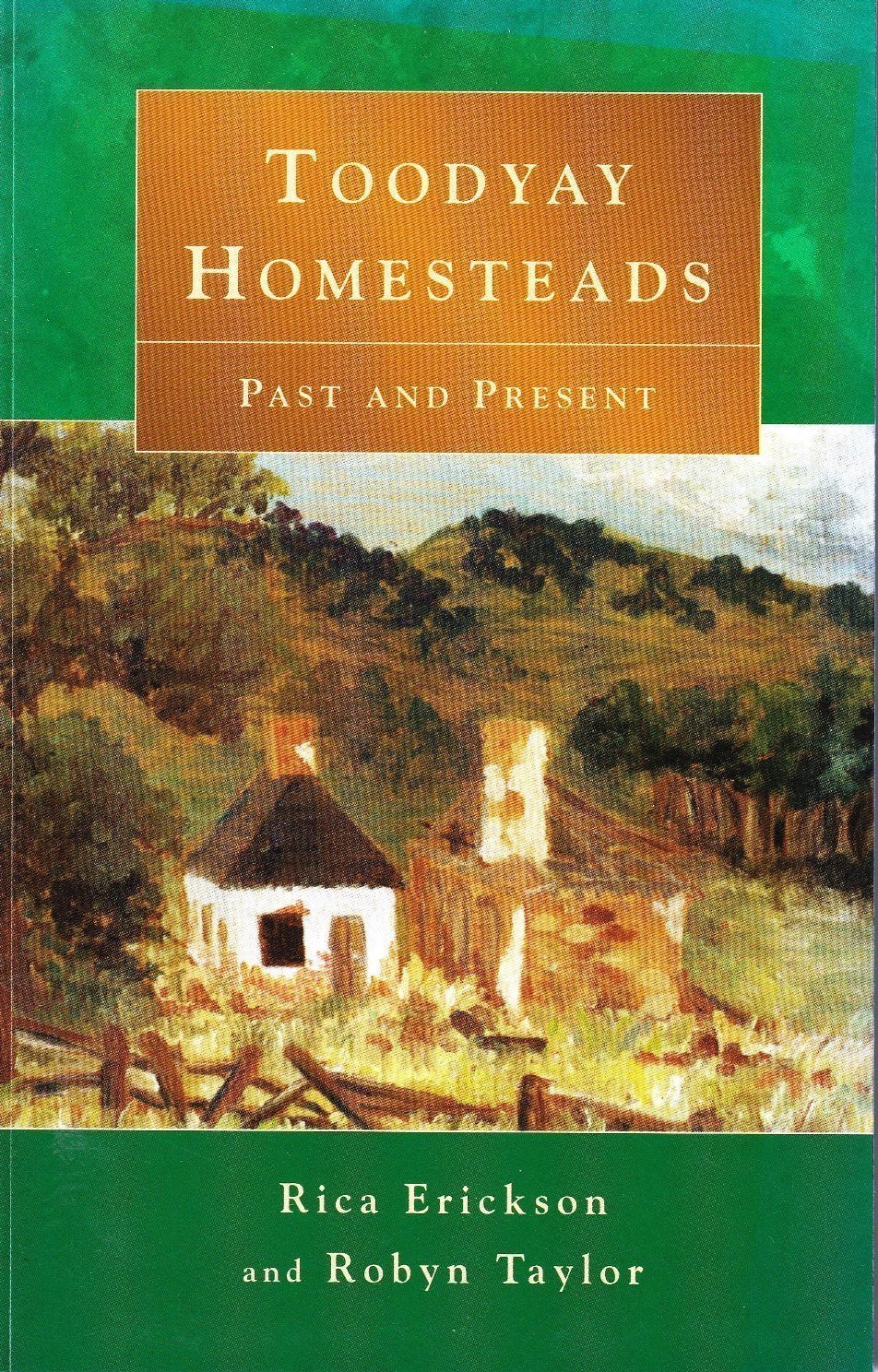 Toodyay homesteads, past and present

Back cover: ‘Toodyay Homsteads, Past and Present is an invaluable book for anyone interested in Western Australia’s rural heritage. It describes the evolution of the Toodyay district and the farming properties that have operated  since the 1830s and 1840s. The book takes the reader on a journey from Morby Cottage in Northam to the Berkshire Valley homestead in Moora.  Individual chapters reveal the social, administrative, and economic forces that shaped the early development of the Swan River colony, while the homesteads provide insights into the use of local materials, and construction and farming methods up to the present day. Solid archival research by Rica Erickson is given life through her own experiences and early conversations with original settlers and their descendents. 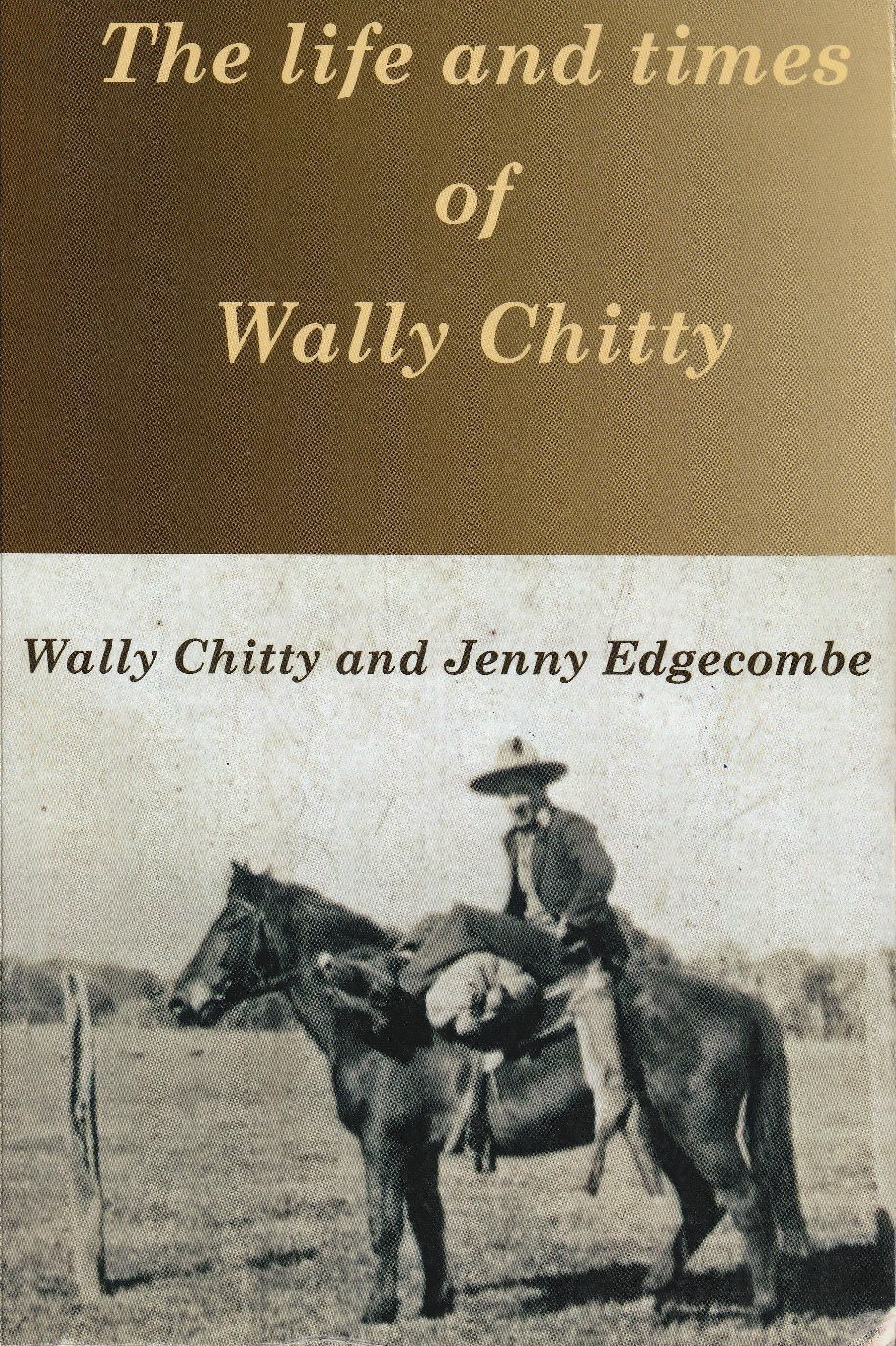 The life and times of Wally Chitty

Back cover: “:Like Wally Chitty’s famous conversations, this book takes many detours from telling the stories of Wally’s life. The narrative dips into the adventures of George and Mary Chitty and their descendants from Surrey, England in 1842 to Toodyay, Western Australia. Many intriguing Toodyay byways and characters are picked up along the way.

The detours reveal stories of Toodyay’s links to the Greenough Flood, the Boer Wars, the mysterious Deepdale Tramway and the Seventh Day Adventist Church. Well-known Western Australian figures such as George Fletcher Moore and the journalist, Vic Riseley, makes appearances. Fascinating episodes from Toodyay’s past include the comical tale of Jumperding School, Toodyay’s outstanding successes in rural education and untold stories behind the tragic 1931  school bus crash.

Wally’s own life is not neglected, from his childhood on a Toodyay farm to his later experiences as a stockman, farmer, family man, sportsman, tourist and local activist.

Toodyay archivist and researcher, Jenny Edgecombe, has compiled and edited this second collection of Wally’s tales, setting them in the historical context of his time.” 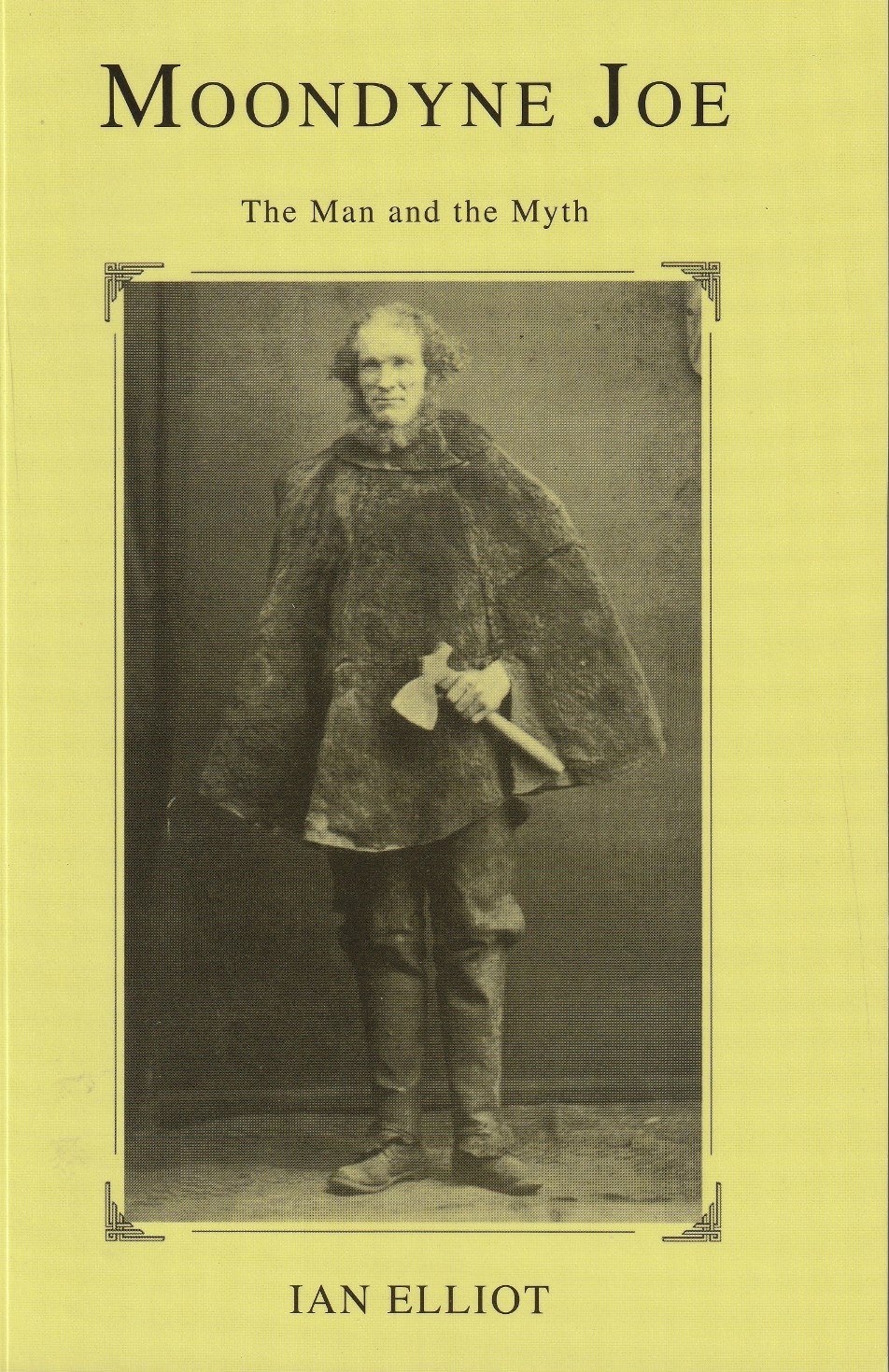 Moondyne Joe: the man and the myth

From the back cover: ‘Joseph Bolitho Johns, ‘Moondyne Joe’ (or ‘Moonie’ to his mates), was a good badman who gallops across the pages of Western Australian history with all the spirit of a wild bush brumby. His prison sentences were frequently punctuated by spectacular escapes and, in the days when Aboriginal trackers were an integral part of the police force, when a horse was a man’s best friend and bushmanship the measure of a man, Joe became a legend in his own time. His story spans the colonial period from the years of convict transportation to the excitement of Western Australia’s gold rushes. Joe’s bushranging exploits and his determination to be free have a romantic appeal that cannot be denied. He may have arrived as a convict and died a pauper, but he left an indelible mark on our folklore. 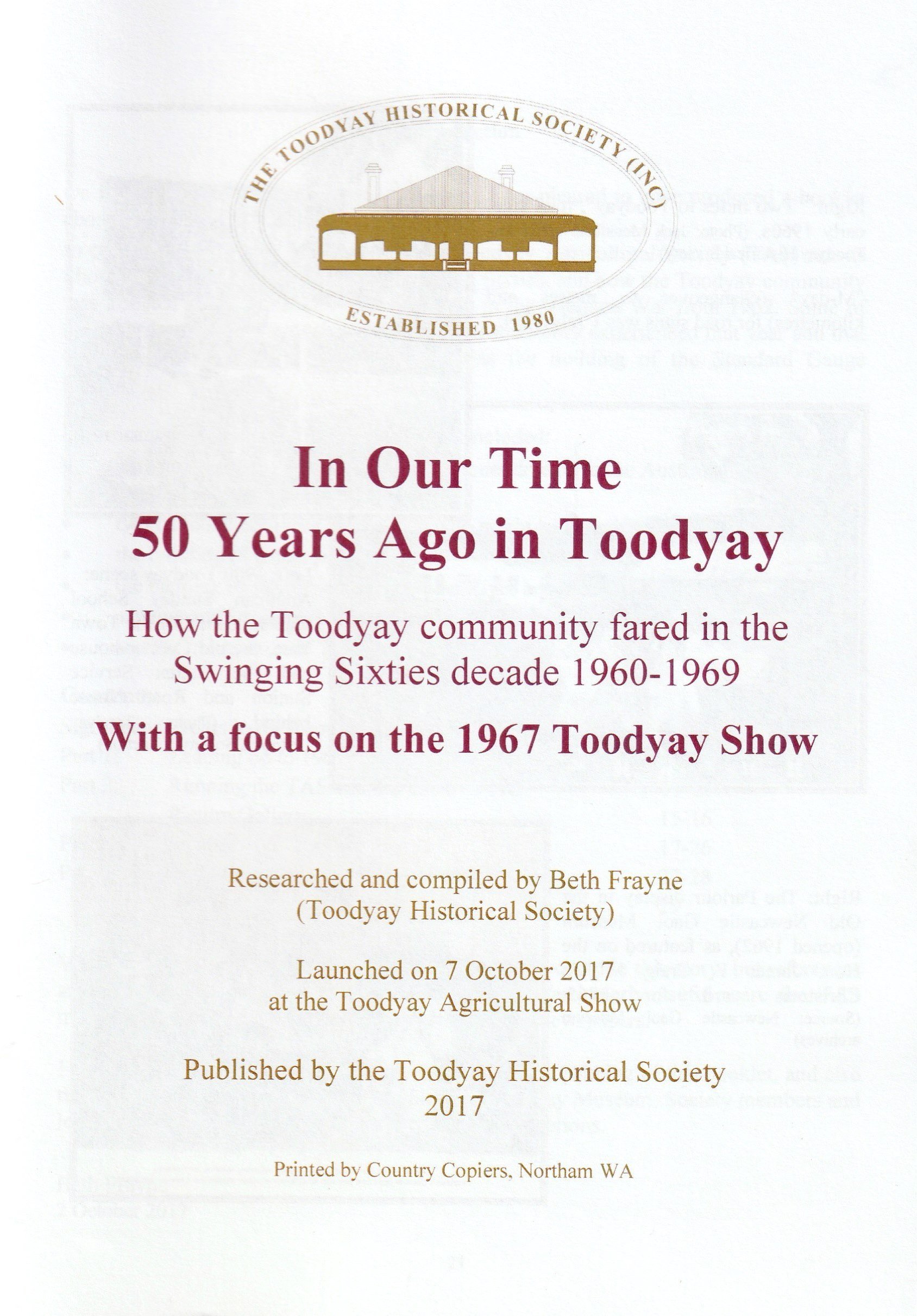 In our time: 50 years ago in Toodyay: how the Toodyay community fared in the Swinging Sixties decade, with a focus on the 1967 Toodyay Show.

“In particular, this work looks at how the Toodyay Agricultural Society (TAS) ran its Show in 1967, in the middle of the Swinging Sixties, and how the Toodyay community was affected by the Australia’s involvement in the Vietnam War from 1962. Some of the other issues and events that the Toodyay community experienced that year and that decade (1960-1969) are mentioned, such as the building of the Standard Gauge Railway. 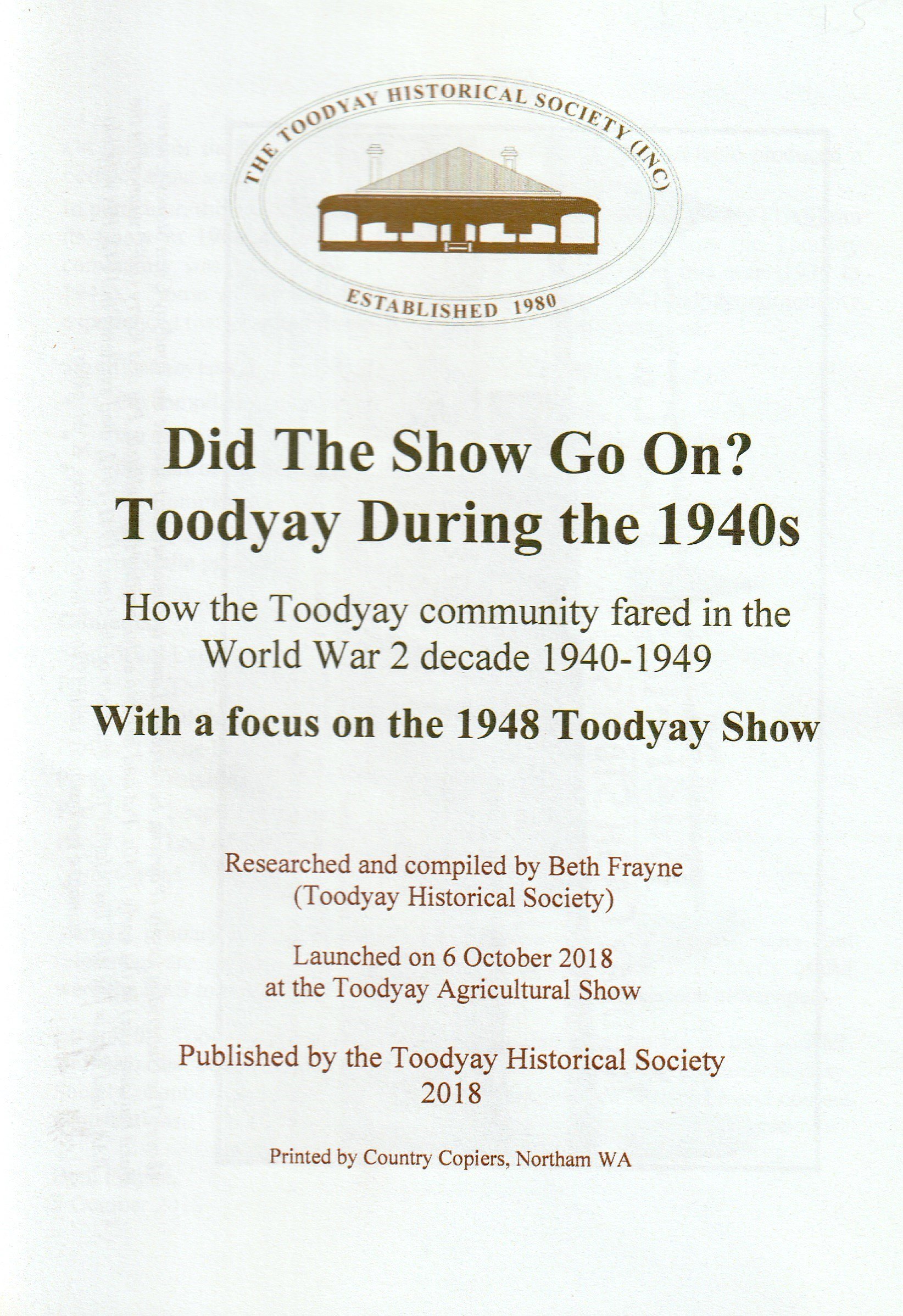 Did the Show go on: Toodyay during the 1940s: how the Toodyay community fared in the World War 2 decade, with a focus on the 1948 Toodyay Show 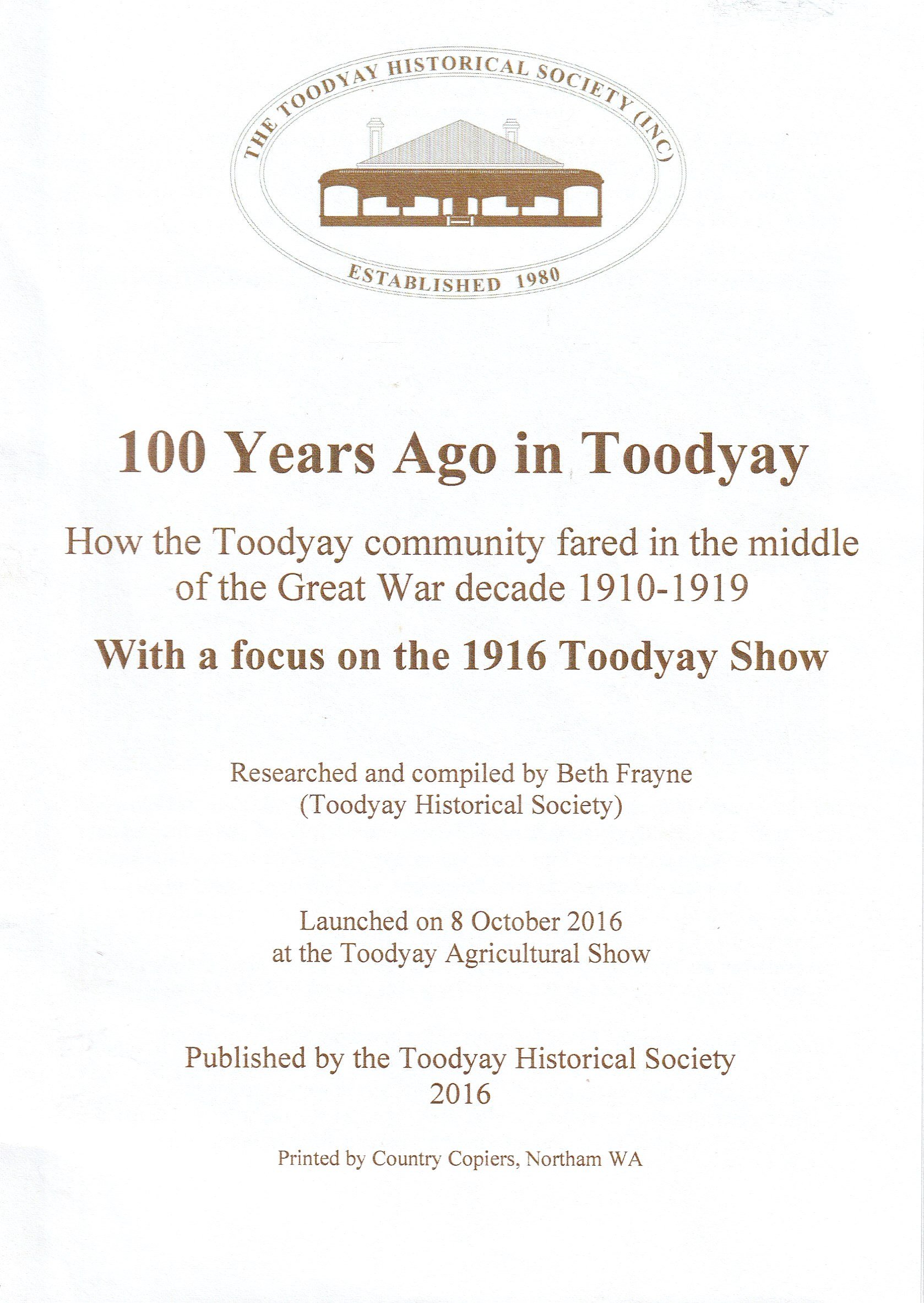 In particular, this work looks at how the Toodyay Agricultural Society (TAS) ran its Show in 1916, in the middle of the Great War period. It also touches on some of the other issues and events that the Toodyay community experienced that year and that decade (1910-1919).

It was a busy year in Toodyay town in 1916, with no less than six public meetings at which the locals were invited to discuss issues of great importance, such as: 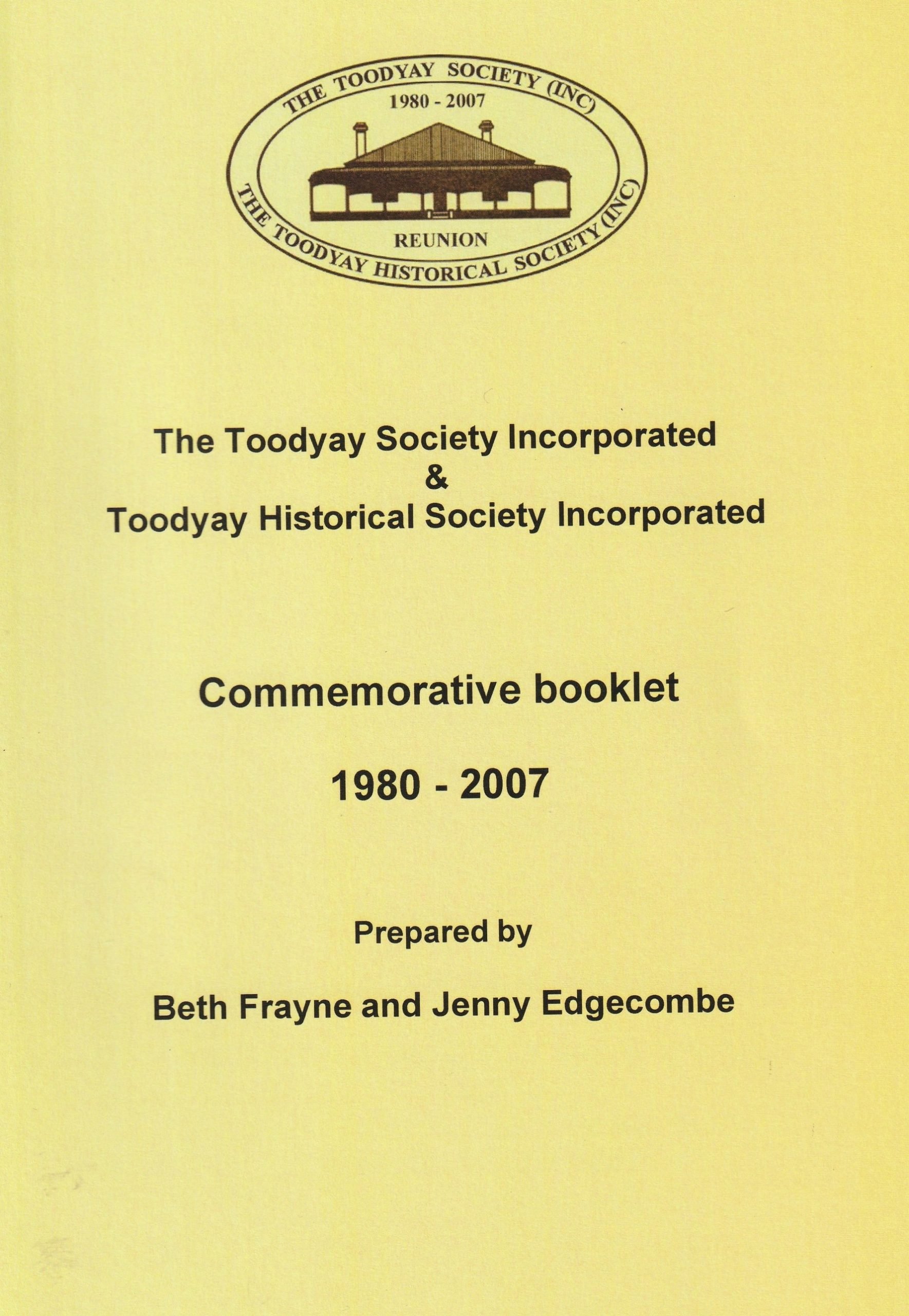 From the Foreword by the then President Dr. Robyn Taylor:

This booklet has been compiled to acknowledge and celebrate the achievements of the original Toodyay Society (Incorporated) established 1980, and its subsequent manifestation in 1994 as the Toodyay Historical Society (Incorporated).  The membership of any group changes and renews itself but as time marches on we are in danger of losing the memory of our past members and what they achieved.  As current members of the Toodyay Historical Society we thought it was timely to capture our own special history from its origins up to the present day. ….

Compiling the information for this booklet has been a huge task willingly undertaken by our current Secretary Beth Frayne.  Beth has burnt much midnight oil trawling through the Minute Books and records to discover the activities of past members and reveal the highlights for each year.  Jenny Edgecombe our Archivist and Librarian completed the text, selected and prepared photographs and pulled the whole lot together into a publishable format.  The Society is greatly indebted to both for their magnificent effort.

We have produced this booklet in advance of the Society’s 30th anniversary in 2010 so that over the next couple of years corrections and additions can be made in time for a bumper 30th birthday publication.   Happy reading! 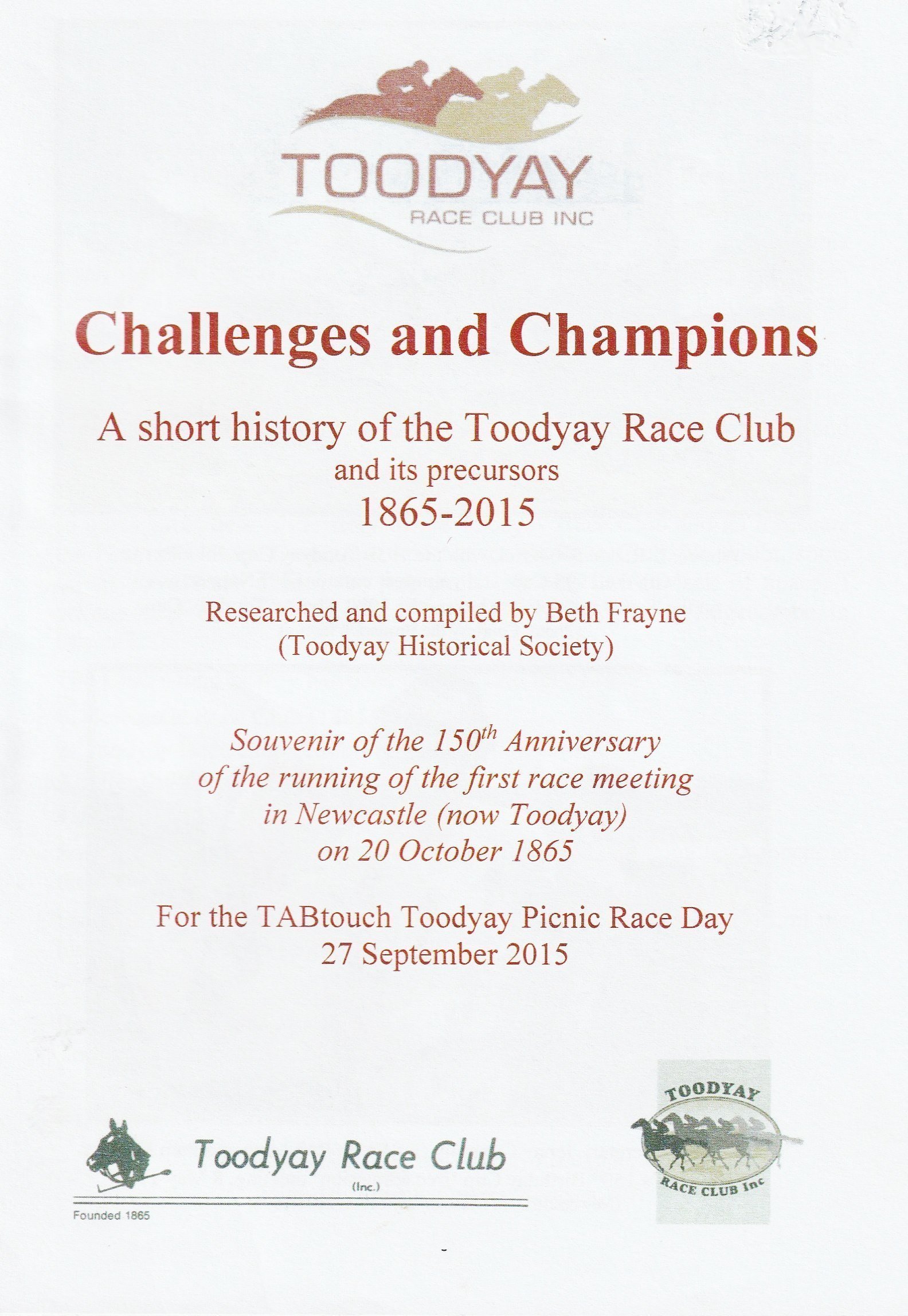 Challenges and champions: a short history of the Toodyay Race Club and its precursors, 1865-2015

From the Introduction by the author:

A request from Toodyay Race Club Chairman John Prater has resulted in this small window into a very long and colourful history of a country race club, which has had its shares of wins and losses, as did the folk that patronised the local races.

I thank John and Club members for sharing the archival resources of the Club and personal collections to show what happened here in Toodyay. The Shire Museum and the Historical Society have also assisted. Online and paper issues of the original weekly and current monthly Toodyay Herald have been a boon.

In quick time, here is the story of the Toodyay Race Club and its forebears the Newcastle Race Committee and Newcastle Race Club. No doubt, some things have been missed, or just plain left out, due to lack of space. I acknowledge the assistance of the Society’s Archivist, Jenny Edgecombe, in this task.

The Club’s long history has been divided into four Eras:

Some lists of interesting facts and names (if somewhat incomplete) appear at the end of the booklet. 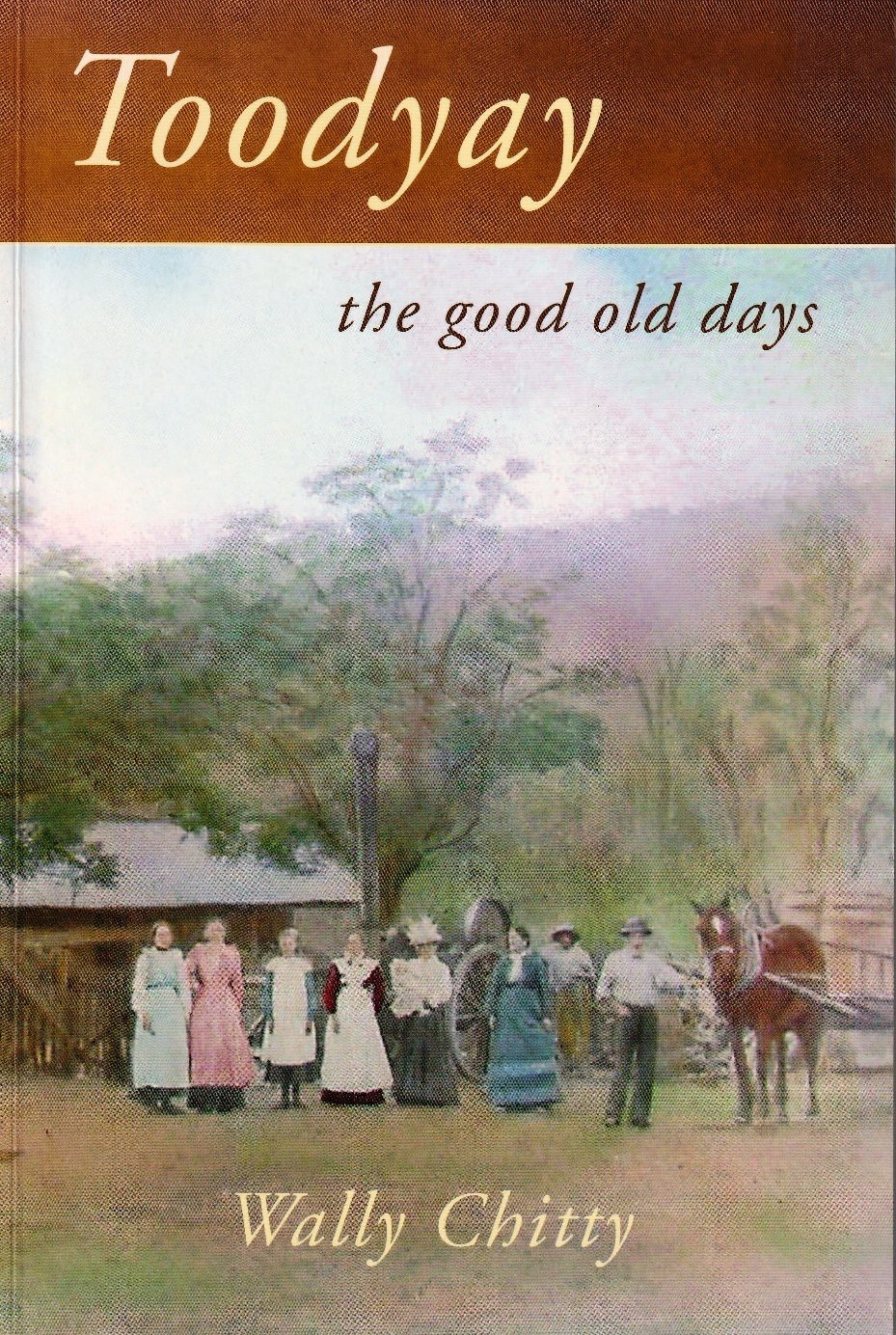 Back cover: ‘Toodyay – the good old days is one man’s story of life in the rural community of Toodyay, about 65 kilometres north-east of Perth, Western Australia. It begins in the 1930s and describes the forging of roads and railways in the area, the Avon River, flora and fauna, early farming practices, businesses in the town, schools, industries, occupations, entertainment, sporting events, amazing incidents, local disasters and the effect of two world wars on a small town. But most of all, it is a story about people and the legacy they have left for those of us who are proud to call Toodyay ‘home’.

About the author: ‘Wally Chitty is a member of one of Toodyay’s pioneering families. He began writing reports and collecting old photos in the 1970s and, since The Toodyay Herald started up again in the 1980s, has written historical articles for the paper.’ (TTGOD, p. 11) 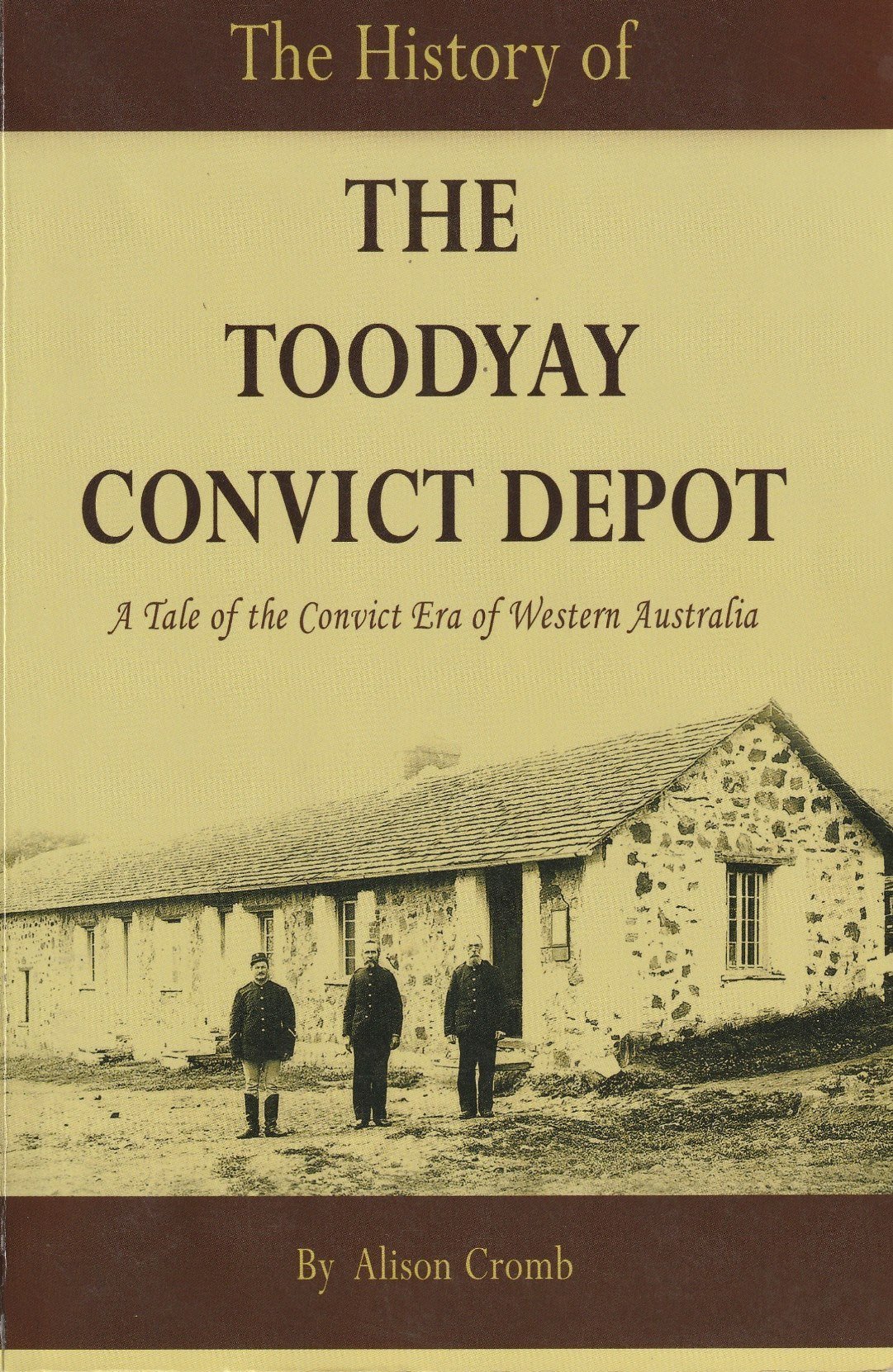 The history of the Toodyay Convict Depot: a tale of the convict era of Western Australia

The present town of Toodyay was built around, then partly over, the second site of the Toodyay Convict Hiring Depot.

From the back cover:

“This book provides a comprehensive history of the Toodyay Convict Depot, exploring its establishment, operation and aftermath. At the same time it offers a valuable insight  into convict period of Western Australia.”

From the Introduction: “This book … covers the years 1850-1900. The site chosen for the Depot is explored, the building programme is examined and its subsequent operations followed. New information has been discovered, much of it sourced from original Colonial records. …”